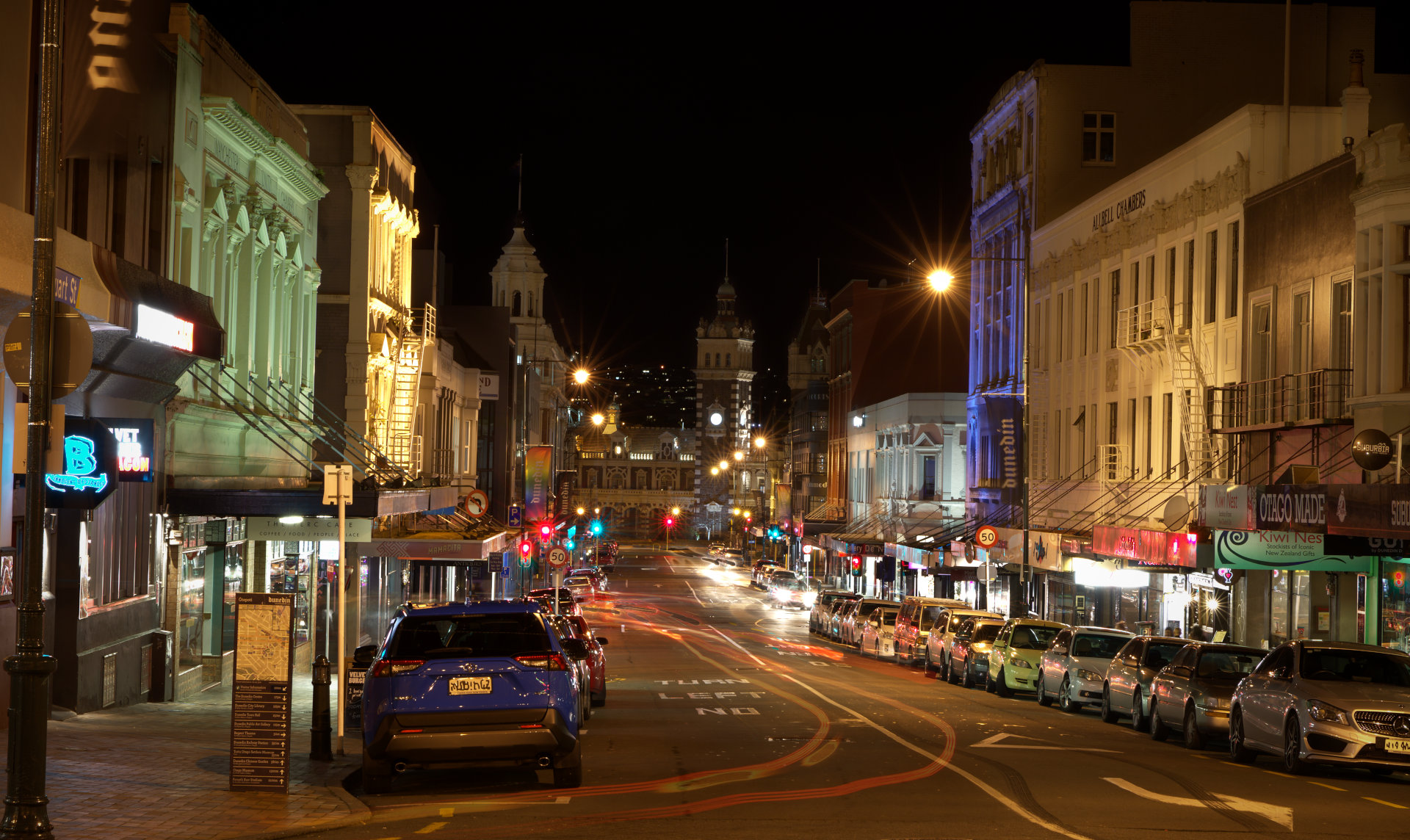 I recently had the opportunity to spend a very pleasant hour, or so, in the heart of Dunedin City. A chance to try my hand at night photography in a city
Dunedin is a small city in the South East of the South Island, New Zealand.
The inner city radiates out from the Octagon, the town square on steroids and the Dunedin Municipal Chambers and St. Paul’s Anglican Cathedral occupy two facets of the Octagon.

Canon 5D mk4 – Canon EF 24~70mm 2.8 USM
Half second exposure – ISO200 – f8 to f3.2
I used the bracketing feature of the Canon 5D mk4 to get 5 exposures and I batch edited the RAW images in Darktable , Luminance HDR to blend the sequence and Gimp to finish.
I don’t shoot a lot of High Dynamic Range HDR but I like the variety of looks you can get with HDR especially with night photography.

St. Paul’s is an imposing structure, if not a tad creepy.

2 x shot vertical panorama f5.6 – ISO 100 – 1 second shutter. 24mm wasn’t wide enough to get it all in so I went for a panorama. I stitched it in Hugin – panorama photo stitcher which proved more difficult than I thought it would. I ended up rotating the image horizontally for the stitch, I also had a large overlap on the images which meant having to crop some of the overlap in Gimp to get a clean stitch.

Just 100 metres to the south of the Octagon, Stands the towering First Church, the city’s primary Presbyterian church. Less imposing, and in my opinion, a way more elegant structure than St Paul’s

I used the in camera HDR feature for this image, I batch processed the raw files in Darktable, Luminance HDR to blend the sequence and Gimp to finish.
24mm – f5.5 – shutter 1 to 2 seconds – ISO 400 to 800.
I used a slightly more processed HDR look for this image and played with a split tone look to get a strong Gothic feel.

The Cargill Monument stands at the corner of Princes Street and Rattray Street on John Wickliffe Plaza.
This monument is extraordinary, 16 years after founding Dunedin this drinking fountain was erected and dedicated to Captain William Cargill.

I used the in camera HDR feature for this image, I batch processed the raw files in Darktable, Luminance HDR to blend the sequence and Gimp to finish.
24mm – f5 – shutter 1/3 of a second, 2 seconds and 13 seconds – ISO 200

In camera HDR, I used the same general work flow, batch edited the RAW images in Darktable , Luminance HDR to blend the sequence and Gimp to finish.
70mm – f13 – ISO 100 – 2.5s 10s and 30 second exposure.
I had real trouble highlighting the railway station as it was so small and dark at the end of the street. I ended up using a square shaped gradient in Gimp to lift and direct the eye to the railway station.

I’m definitely Going Back to Dunedin

Night photography in a city is totally different to star scape or milky way photography. I only had an hour or so on this trip but it has given me a small taste of something I would like to investigate further.
I have a particular fondness for this area, it has a rich history and beautiful natural surroundings and I can’t wait to go back to explore and photograph Dunedin the Edinburgh of the South.